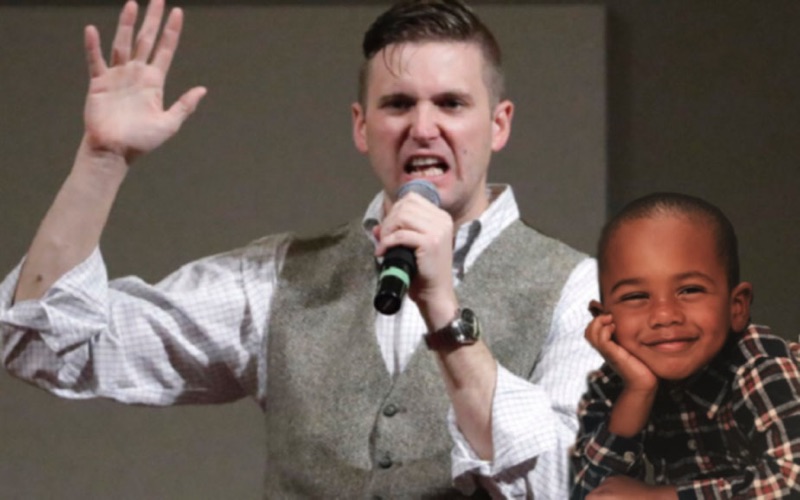 I’m Black, and I think Richard Spencer Should Speak At The University of Michigan

Before anyone gets too upset with me, let me make one thing clear. I find Richard Spencer to be a vile and disgusting human being, and wholeheartedly disagree with his ideology. However, with all that being said, I think it would be best for the University to allow him to come to campus. What’s more, I don’t think a single person should protest, strike, rally, or take any action that would disrupt the event.

Richard Spencer represents a problem that has plagued this country from its inception, but with a recent shift in our political climate the problem has only been exacerbated. He is a part of one of the worst groups in this country, a group that seeks to intimidate, belittle, and eliminate this country’s minority population. Spencer, and those who buy into his thought process account for one of the single most dangerous mindsets facing this country’s future, but in spite of that we must let him speak on campus.

Despite his efforts to adopt an educated and wise demeanor Richard Spencer is nothing more than a common troll who can’t operate within the grounds of a logical argument, but rather gets by on pure shock value alone. A campus isn’t like a Facebook comments section; the goal isn’t to see who can rile up others, but rather to learn and move forward with the ideas presented to us. Letting Spencer speak in such a place of knowledge isn’t going to legitimize him, as the demented ideas he preaches aren’t based in any legitimate knowledge. If anything, letting him attempt to measure his words up against those who have spoken before him will only highlight just how ludicrous he and those who follow him are. He doesn’t actually benefit from being able to speak in a calm and collected environment such as the University, and Ann Coulter’s attempt to speak at UC Berkeley is proof of this. Many had legitimate concerns about what would occur if Ann Coulter was allowed to preach her hateful ideology, and what ensued was a wave of unrest and violence that only served to get Coulter more airtime, as she used the chaos to inflate the issue to massive proportions. She benefited from the refusal to let her speak, and the campus wide reaction only fed the narrative. Spencer will be no different. He’ll take every opportunity to elevate any drama already present, and use it to further stoke the fire his words may cause. He feeds on the energy that protests cause, and regardless of the intentions we can not allow for Spencer to gain any advantage.

Racism has changed, and the way we should combat it needs to change along with it. Supremacists are trading in their Klansman sheets and hoods for expensive three-piece suits and slicked back hair. While we as a society are generally quick to disavow those grungy looking men parading around wearing swastikas, many are far less willing to quickly write off the younger, cleaner, and overall “smarter” looking ones of the group. These new age racists emit a more laid back aura. They’re a bit sarcastic, they play off their horrendous comments as jokes, not to be taken seriously, and often will try to convince the masses that they simply are proud of their heritage and ancestry. Rather than setting crosses ablaze they instead choose to inflame our emotions, film the reaction, and then laugh at how “triggered” or “out of control” we all are. When faced with a peaceful and well-meaning protest they often point to minor disputes, and draw a false equivalence to delegitimize the purpose of such a protest. Please don’t misunderstand, protest is a valid form of inducing change and making one’s voice heard,  but at a certain point we all must realize that simply being heard isn’t good enough anymore. Now more than ever it’s the content that is going to invoke the change we so desperately need.

So I propose that we let Spencer speak. We let him put his vile thoughts on display for all to see, and we do it without interrupting. We let him have his five seconds of fame, all the while making sure to listen to each and every word, and after he is finished we do what we as a community have done exceedingly well to people such as Spencer, we prove them wrong. We refute each and every point through organized and focused articles, speeches, and displays. We take to news articles, mainstream media, and social media alike, all in an effort to disprove Spencer’s core ideals. We rise above the racists, the ignorant, and the trolls, and show once again that their words are just meaningless noise.

I acknowledge that many will disagree with the position that I have. There has been an increasing push-back against racist ideology, and with it has come a crusade against giving those who preach these ideologies a platform. While I understand that many feel that providing a place to speak “validates” these individuals I could not disagree more. Acknowledging the existence of hate does not normalize hate, but rather calls attention to it. Despite how seemingly obvious it seems, acknowledging the intolerance in our own community is the first step to combating it. We can not continue to pretend that if we keep those with hateful rhetoric to the fringes of society that they will go away. It’s high time we look bigotry in the face, and acknowledge that it’s commonality in our society.

Now more than ever I think we all could use something to rally behind. I don’t think I’m alone when I say it feels like the world is falling apart, and it’s getting increasingly lonely. We are at a tipping point, and those who would like nothing more than to send it over the edge are emerging from the shadows, and how we address them could drastically change the future of this country. So let Spencer speak. Let him shine a bright light on those who seek to oppress minorities in this country. Let him expand upon all his twisted thoughts and ideals on a grand stage. Let him see just how meaningless his words really are, because at the end of the day he can’t change what we are. A group that time and time again has looked into the face of bigotry, laughed, and continued to live our lives with a level of excellence that shines through the hateful rhetoric.